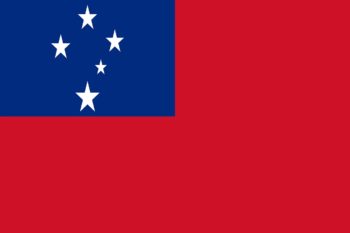 Samoa Islands : Very often, only the lovers of the Scottish writer Robert Louis Stevenson (1850-1894) know the Samoa Islands. It is there, in a setting of incredible tropical prodigality, between coral beaches and old volcanoes, waterfalls and lagoons populated by turtles, that the author ofTreasure Island (1883) came to end its days. His tomb, regularly maintained, crowns a mountain dominating Apia, the capital, and the ocean that extends it.
No doubt the archipelago and man were made for each other. What a treasure, indeed, these rich lands covered with a profusion of coconut trees, pandanus and corpulent my trees (*), floating in the middle of the South Pacific, in the mists of myths. Samoa is a bit like the eternal dream of a virgin and generous island – except that the two great Western Samoa and their cortege of islets are well inhabited.
(*) Ma trees: ma trees are trees amazing plants from the rainforest of the Samoa Islands, featuring a kind of wall made of root structures that seem to evaporate from the thump principal.

The Samoans are not rich but, if pointed out to them, they do not hesitate to affirm that they have quite enough. Rare wisdom. The important thing in Samoa is to have a family and the land that goes with it. His fruits neighborhoods, are the taro, Its cocos produce, it seems, enough to face the future with serenity.
For the rest, there is rugby, the church and the fa'a samoa, the sacrosanct custom. It stems from a 3-year-old tradition, stemming from the first navigators who approached these shores before making it the political and cultural epicenter of the Polynesian world.

Cooking in Samoa: In Samoa, like almost everywhere else, the meal is one of the cornerstones of social life, which brings together families in the broad sense. A tradition imposes itself here from the outset: the umu. Common to the entire Polynesian area, this feast is, in many archipelagos, prepared in a " four » dug into the ground where hot stones are placed. Here, it's a little different: the stones are white-hot in a hearth, the embers and the ashes removed, the food placed on it, covered with other hot stones, then with two layers of banana leaves and finally wet mats. The goal: to lock in the heat so that porc, chicken, fish et octopus topped with cream de coco, plantains bananas et taro cook stifled.
Most tourist hotels in the archipelago organize at least once a week a fiafia (traditional evening with dances) with umu.

Among the other specialties Samoans, it is necessary to mention the essential palusami (youth leaves de taro to the cream de coco) and oka (fish raw to the cream de coco), the chicken wire rack, meat au barbecue and, a classic that will not please everyone, the lupulu : of corned beef our leaves du taro (since the Second World War, Polynesians love the corned beef
The leaves du taro sufficiently evoke the spinachbut his tuber takes, when cooking, a taste weird glue. We also eatyam, pumpkin and potatoes… most often also prepared with cream de coco. The fruit of thebreadfruit is offered just wire rack and skin.

The market for fruits et vegetables, the perfect place to stock up on mangos, papayas, bananas, ananas, carambolas, soursop et cocos presented on the stalls or in baskets in braided palms (in a jiffy).
For those who want a "real" Samoan dessert, there is the pudding, panipopo (rolls au coco), panikeke (beignets round), masi samoa (fat biscuits au Butter and… coco) and others paifala (kinds of slippers thickets to the cream or toananas).

Samoan drinks: Remembering the time when Samoa was a German colony, the archipelago has two breweries: vailima, the oldest and most popular, and the Table.
Note: thealcohol sale is prohibited on Sundays outside hotels, restaurants and bars. These close their doors at midnight at the latest.

The 'Ava drink, which is better known as kava: a Polynesian legend evokes the appearance of this drink color of earth, served to the first man by the Creator himself. A symbol of respect, of sociability, of communion with others, the 'ava is inseparable from the fa'a samoa, which is the socio-political, traditional and customary way of life of Samoan culture: it is still consumed in a ritual way during public meetings between matai (chiefs), on the occasion of national political ceremonies, religious meetings, or during a visit from a dignitary, for example.
The label is essential: not the one on the bottle, but the order in which the beverage is served, which must reflect the social status of each.
The 'ava is taken from a local species of pepper plant (botanical name: Piper methysticum). Her the root is dried and at length poundedthen watered bywater, giving a liquid a little sticky, filtered through fibers byhibiscus before being poured into the tanoa (bowl common). It is then served in half coconut (ipu tau) according to the order of protocol, with a good shot of welcome speeches and emphatic thanks.
Is it good ? Not really. Is it bad? No more. The 'ava undeniably has a flavor vegetable, a little bit of peppery (Nothing suprising…). Slightly euphoriant, it numbs the lips, the tongue, the head also if one consumes too much. It once helped men communicate with spirits and priests go into a trance – which is why missionaries did their best to ban it.