Vietnamese
Gastronomic > Culinary glossary > The bakery and the pastry shop 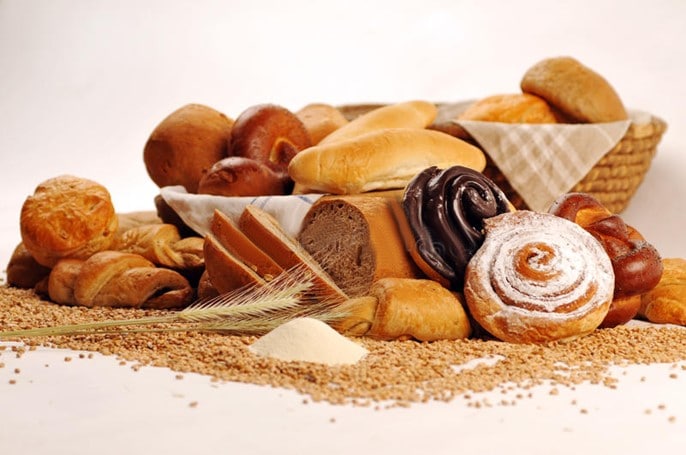 La Boulangerie : A bakery is the place where the pain. In France, where the domestic manufacture of pain disappeared only after the First World War, the profession remained largely artisanal.

From the Egyptians to the "tarnisiers". Already well-organized bakeries are represented on the frescoes of Egyptian tombs. They made unleavened pancakes and pains leavened with brewer's yeast. Herodotus relates that it was from the Egyptians that the Greeks learned the secrets of pain survey. In 168 BC. BC, after the victory against Perseus, king of Macedon, the Romans took Greek bakers into slavery.
In 100 apr. J. - C., Trajan created a corporation of bakers endowed with many privileges. To avoid riots, the pain was distributed free of charge to the poorest citizens of Rome.
Under the reign of Augustus, Rome had three hundred and twenty-six bakeries for a million inhabitants. It soon came to a nationalization of bakers, paid directly by the state and not having the right to sell their business. After the Roman conquest, the Gallic bakers were grouped together in corporations. From the beginning of the Middle Ages, in the countryside, the feudal lords, in order to collect taxes, required their serfs to come and grind their wheat at the seigneurial mill and bake the dough in the ordinary oven. It was in the XNUMXth century that the corporation of sifters, or tameliers, was really born, so named because they had to pass the flour that was delivered to them through a sieve. Philippe Auguste granted them the monopoly of the manufacture of pain within the walls of Paris (where they were then sixty-two in number).
Royal ordinances. The word "baker", which had replaced in the thousand century that of "sieve", (men who went from house to house to make pain) comes from Picard Boulent, "maker of pain in a ball ". Orders fixed with precision the quality, the weight and the price of the pain ; all pain underweight was confiscated for the benefit of the poor. Philip the Fair reformed this legislation, and the fine was therefore proportionate to the offense. He reduced the privileges of bakers and allowed individuals to buy grain. Charles V, for his part, regulated the places and times of sale of the pain, as well as its price, which varies according to the flour used.
The XNUMXth century is a milestone in the history of Parisian bakery: the production was perfected, the flour without bran was delivered more abundantly to bakers, brewer's yeast was introduced, but its use regulated, and the number of markets increased. At the very beginning of the century, Marie de Médicis brought in her train Italian bakers who made new products fashionable. The Parisians showed themselves more and more fond of pain white and light, with pure flour wheat.

- From the Revolution to the modern bakery. In the XNUMXth century, the cultivation and production of wheat made real progress, and the specter of famine gradually faded. But the royal administration, far-sighted, accumulated large quantities of grain.
It was the Controller General of Finance Turgot who, in 1774, decided on the freedom of the grain trade throughout the kingdom. This decision was premature, however, as agriculture was still dominated by smallholdings. Riots and looting of wheat depots marked the year 1775. This was called the "flour war".
In the aftermath of the storming of the Bastille, the ever-present famine became exasperating. Paris ran out of pain, and it was to the cry of "Let's go get the baker, the baker and the little baker" that the people, led by the women of the market, took the road to Versailles. On March 2, 1791, the Constituent Assembly abolished jurandes and masteries: henceforth, the bakery was "free", while remaining subject to regulation by the public authorities. Bakery products continued to evolve. From 1840, the pain Viennese became very fashionable in Paris.

Today, the bakery remains very present (more than thirty thousand artisan bakeries), even if it is struck by the drop in consumption of pain with the French. Large-scale distribution is investing considerable resources to improve the quality of pain industrial, whose market share has stabilized. And the varieties of pain have multiplied. At the request of the profession, the name “bakery” was regulated by the law of 25 May 1998 (see Bread).
- Bakery equipment. From Antiquity to the beginning of the 1920th century, baking equipment hardly changed: Roman frescoes depict kneading machines operated by animals. The mechanical kneader only dates from XNUMX.
The furnace, formerly fueled with wood, then with coal, which caused many fires of houses and buildings because the walls of the furnace directly touched the walls made of old materials. A law of the XNUMXth century imposed during the construction of new bakeries the "passage of the cat" between the oven and the partition to avoid fires. the four is today heated by electricity, gas or fuel oil. In baking terminals and factories pain, it is most often a rotary kiln, where a vertical carriage enters. In traditional bakeries, the deck oven is the most common.
Various other improvements have taken place. The high speed kneader whitens the dough by oxygenating it. The controlled fermentation chamber (or controlled growth chamber) offers the baker more flexibility because it is an enclosure that can generate cold or heat: it therefore allows him to slow down or accelerate the fermentation of the dough according to its requirements. needs and its organization. The last technical contribution is that of freezing. In France, it has become a common practice, especially in industrial baking.

Pastry : Pastry includes all the preparations sweet ou salty requiring the presence of a dough as a support or as an envelope generally cooked in four.
The pastry chef's role is mainly in the field of sweets and desserts: biscuits, desserts hot, cold or iced, big and small cakes, Petit fours, showpieces, etc. ; the bites, blackouts, pies, quiches, patties, pies, vol-au-vent, etc., rather belong to the art, professionally different, of the cook.
Pastry is closely linked to the manufacture of ice and confectionery and requires the use of creams and sweet sauces. The word "pastry" also designates the profession of pastry chef and the shop where these products are sold.
History: Prehistoric men already knew make up of  dish sweet sap-basedmaple or birch, miel wild, fruit and seed. It is, it seems, in the Neolithic that the first cakes (porridge of cereals placed on a stone heated by the sun). The Egyptians, the Greeks and the Romans, then the Gauls prepared cakes of corn, wheat orbarley embellished with seeds de poppy, ofanis étoilé, fennel or coriander. Gingerbread and "puddings" date back to Antiquity, and the Greek obolios (ancestors of forget and waffles) gave their name to the first pastry chefs, the “obloyers” or “forgetfuls”. These merged, moreover, with the bakers; all offered pains au miel and spices, pies meat in cheese, to vegetables. We also knew the "beugnets" (beignets) to apples and cooked creams.
But it was the Crusaders who, in the XNUMXth century, discovering the East sugar cane and puff pastry, gave a decisive impetus to the pastry shop proper. At that time, pastry chefs, bakers, roasters and caterers claimed specialties within the domain of one or the other. Saint Louis began to put good order there by giving, in 1270, a statute to the “master forgetting and varlets d'oubloiries”.
In 1351, an ordinance from John the Good specified the list of “pastries”. Another ordinance, in 1440, granted the exclusivity of the pates of meat, fish and cheese to the "pastry chefs", who thus had rights but also duties of quality.
The statutes of 1485 prescribed unemployment on legal holidays and on Saint-Michel, patron saint of the corporation. It was in 1566 that the definitive merger between pastry chefs and pastry chefs took place, who also obtained the monopoly of the organization of weddings and banquets. The corporation survived until 1776, when Turgot abolished the "trades"
However, the art of the pastry chef did not really begin to exist until the 1638th century, only to flourish in the XNUMXth and XNUMXth centuries. A few dates punctuate this history: XNUMX, invention of tartlets amandines by Ragueneau; 1740, introduction in France of baba, through the King of Poland Stanislas Leszczynski; 1760, creation, by Avice, of cabbage grilled and ramekins ; 1805, invention of the cornet decoration by Lorsa, Bordeaux pastry chef.
The greatest innovator, at the dawn of the XNUMXth century, remains unquestionably Antonin Lent, to which tradition attributes the croquembouche, meringue,  nougat,  vol-au-vent and the improvement of the puff pastry.
He was followed by other "greats" like Rouget, the Julien brothers, Chibout, Coquelin, Stohrer, Quillet, Bourbonneux, Seugnoy, etc., which broadened the range of pastry making, with bourdaloue, gorenflot, yarrow, mocha, Neapolitan, Genova bread, honored Saint, Savarin, three brothers, etc.

Subscribe to discover articles on baking and pastry making!