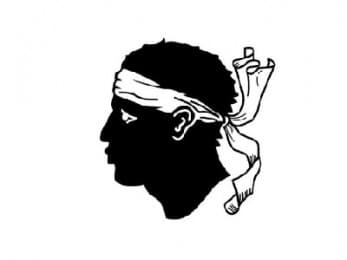 Corsica is a mountain bathing in the Mediterranean. The island has its highest point, Monte Cinto, at 2710 meters. At all times, the Corsicans have been a people of mountain people clinging to their rockeries rather than a people facing the sea.
This Isle of Beauty was Tuscan, Etruscan, Roman, Goth, Vandal, Greek, Lombard, Genoese, French, again Genoese and, from 1768, it became a French department, then two departments.
In a small space, the island presents a very contrasting plant panorama depending on the altitudes. Up to 600 meters, it is the lower zone with the towns and villages of the coast, the orchards ofcitrus and other trees fruit, the cultures of vegetables, etc. Above this altitude, it is the maquis of heather, strawberry trees, myrtles, cistus, pine et holm oaks where graze goats et sheep. The third level is that of the chestnut grove, introduced between the 16th and the 18th century. In these infertile lands, the chestnut ( " L'breadfruit Island) was essential for many years to avoid famines. It is in these forests that the pigs, resulting from crosses between pigs servants and boars.
Finally, above, it is first of all the forests de beeches, pine, birch trees then, on the alpine level, the ferns, blueberries, etc.

Corsican cuisine is a Food traditional practiced in Corsica, which is passed down from generation to generation.
Chestnuts et porc I smoked, fish et shellfish, wine et game : traditional Corsican cuisine is both mountain and Mediterranean. In addition to common products in sunny countries, such asolive, tomato,Eggplant and citrus (lemon, citron, Orange mandarine, clementine), it uses fruits quite rare elsewhere, such asarbutus, medlar and Dried fruit. The chestnut, which was once the basis of the daily diet, is now used for blanks, cakes, beignets et jams. THE'olive and his oil are also among the basic elements of this kitchen which ignores the Butter. Little spicy, Corsican cuisine adds to aromatic herbs of the maquis (thyme, rosemary, thyme) or from the garden (basil, oregano) the mint wild, the bourrache, fennel wild, the lentisk,angelic and myrtle.

Subscribe to discover the cuisines and flavors of Corsica!

Buy here and at the best market price your book (s) on Corsican Cuisine:
Note: By clicking on the images below, you are redirected to the Amazon site and in case of purchase our site will receive a small commission. If this is not a problem for you, it will contribute to the improvement and sustainability of this site. Also, we thank you very much.